Let’s start by going over GW27 predictions and results:

9/13 correct predictions. Another Strong week for the model, and it seems that this will be our baseline from now on. The model has gathered enough data points now to correctly predict most of the matches. Ars-Lei, Tot-Bol, Der-Lee, were all bang on predictions. Let’s hope we keep going in this rate, for me personally the model has really helped in a lot of 50-50 decisions I had to make. Very pissed about the Shearer captaincy though. The goals came but not from the right person (had Solano as well).

2/3 correct recommendations. Solano was the cream of the crop here with his 27 points, can’t get much better than that. Burley also did the expected and surprisingly he hit exactly the 10 points I was expecting of him. Henry failed me as my only single GW player in the squad, he did pick up the bonus points, so it wasn’t as bad.

Now for GW28 ratings and predictions:

For this week, we have the Ars DGW and a big mess apart from that. The 2 highest predicted scores are for… you guessed it… Arsenal with 1.6 and 2 expected margins in their games. Both games have a high chance of clean sheet as well. So triple Arsenal is a no brainer, but you won’t see their players below. I will recommend the best single GW players in my opinion.

First player to recommend this week is Benito Carbone. After Arsenal games, the highest predicted margin is for Chelsea wit 1.6. Chelsea has the potential to bring Derby back to reality after their great TGW and Carbone seems to be involved whenever they win.

Second player to recommend this week is Eyal Berkovic. The best Israeli player of all time, The star of Southampton’s 6-3 win over Utd in 1996, the receiver of a Hartson volley kick to his face, and the new signing of the loaded Leeds midfield. But as we know new signings often gets right into the squad and with Everton being one of the weakest home teams (17th) I have a feeling Berko returns. This is a complete bet, but he will be in my team.

Third recommendation, and a differential one is Bosko Balaban. Villa are playing Fulham at home with expected margin of 0.7. With Dublin injured, I believe Balaban is nailed to play and have every opportunity to return big against the crumbling Fulham. 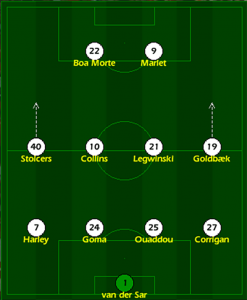 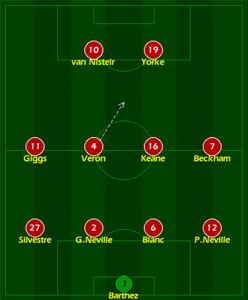 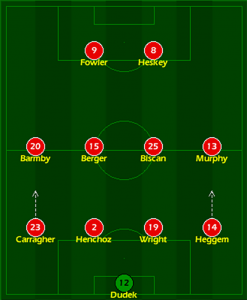