Hello all! Another article on the FPA Data I’ve made, to try and help us come up with some decent picks for Champ Man! First off – a huge shoutout to Andy, Dave & James for the creation of the website, which we will be using from GW20. Also to @ragtime_willy for his skills! It looks fantastic and will be awesome to use. I’ll be sad to see the sheets go though.

GW16 was a massive let down for me, mainly down to Robbie Fowler. I captained him and he got a whopping total of 10 points. So a red arrow for me, and I’m looking forward to trying to get a green arrow in 17!

Right, lets have a look at the data with a bit of explanation for any new readers ahead of the 2nd Half of the Season Launch.

Overall Points For and Against at Each Position

With all of my charts, Green indicates that teams are either conceding the most points (Points Scored Against) at these positions, or scoring the most points (Points Scored For). Red tells you that they are conceding the least/scoring the least. So we target players on this basis. If you have a green scoring team coming up against a green conceding team, there is a good chance of success. So I use this as a starting point to identify positions at each team that are doing well/badly.

Once I’ve identified picks/positions here, I move onto the tables below, to hone in on home and away data.

Points drilled down into Home & Away and Points Per Game (PPG)

So here we can start to drill down into specific fixtures, to help us plan ahead or identify weekly punts. You’ll notice that Sunderland give up a lot of FPL points at home, but not many away from home. This can be attributed to their mentality and how they set up on the road. Spurs have a great match up at Derby this week, and their Forwards score lots of FPL points on the road. However, Derby don’t concede many FPL points to Forwards at home. We’ve seen Dean Sturridge let us down in bad “FPA” match ups recently, so it gives you food for thought that other Stats areas don’t show you in such a format.

So this week I can announce that myself and @whitebeard_fpl have worked on and will soon have a Talisman chart that excludes appearance and midfielder clean sheet points! This will really show who the key contributors are on each team.

Looking at the basic Talisman data, we have the first inductees into this seasons “100 club”: RvN and Allan Johnston! We also see Kevin Phillips reclaim his throne from Laslandes after 4 goals in 2 games. He faces a Leeds team who are terrible on the road in GW17.

As you can see here, Rebrov’s 17 point haul takes him to 3rd overall, and he doesn’t look like slowing down anytime soon. Boa Morte has also jumped up. This chart is useful at a quick glance if you’re looking at weekly scores in addition to total score, to try and identify any form or patterns.

Despite only one clean sheet at home, I think Keller could do well. He’s 2nd overall for bonus points, 4th for saves and 5th overall for points. All this despite Spurs defensive frailties. Derby are 14th for goals scored on the road, on 7. Derby give up an average of 4.9 points per game to keepers when they play away from home, so hopefully Keller can do well for us.

This was a tough call as I like a lot of the DGW defenders this week. Gordon plays OOP and has been excellent. The United defenders are reliable. I’m going with Ugo though, as he is an absolute bonus point magnet for Boro. They play Chelsea at home first, who (using MotleyBarnet’s H/A data) are bottom for goals scored away from home with 4, and also bottom of the failed to score table, with 6 blanks in 9 games. A clean sheet here is a strong possibility, as Chelsea concede the most FPL points to opposing Defenders when they play away.

With United, they might not get a clean sheet, but I fancy Ugo to be heavily involved and at least get us some bonus points.

Another close call between the 3 main United Midfielders. In the last 4 games, Becks and Giggsy have been neck and neck in terms of their FPL output. Leicester concede the most FPL points on the road to midfielders and are in absolute free fall right now. Becks is your man if you want key passes/assists, whereas Giggsy has had more shots. Veron is in between these and more expensive. I’ve decided for Beckham on overall season stats. That extra £1m could be better spent elsewhere but it is a tough call. Current ownership on Whitebeard’s site is 42% Becks, 2% Giggs, so if that sways you, maybe Giggs could be a lovely differential.

The easy pick here is RvN but most people already have him and if you don’t – you probably should for this game week. I fancy Kevin Phillips to continue his rich vein of form though. Leeds when playing away have been pretty terrible, giving up loads of FPL points to opposing Forwards. Sunderland have a new manager and look like they’ve turned a corner, and with 4 goals in his last 2 games, I think Super Kev could do well. For what it’s worth, I also like Viduka in this matchup. We could potentially see a shootout!

So there you have it. I hope you found this useful as part of your CMFPL research. Please give it a like/retweet if so, or if not, drop me a message as I love to chat stats etc! 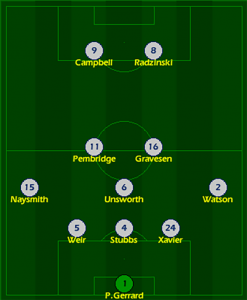 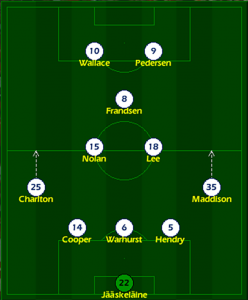 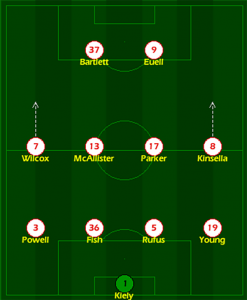